The OmniPoint switch has completely redefined what it means to be the fastest keyboard in the world. Aside from having the highest ever actuation point at a mere 0.4mm, it also eliminates the limitations of debounce time, allowing it's response time to be optimized to an inhuman 0.7ms.

As we have previously discussed, the OmniPoint mechanical switch has ended the war for the "fastest" switch in the world with both it's record-breaking actuation and response time.

Not only are OmniPoint switches adjustable up to 5x faster than other keyboards, but their response time is 8x faster. 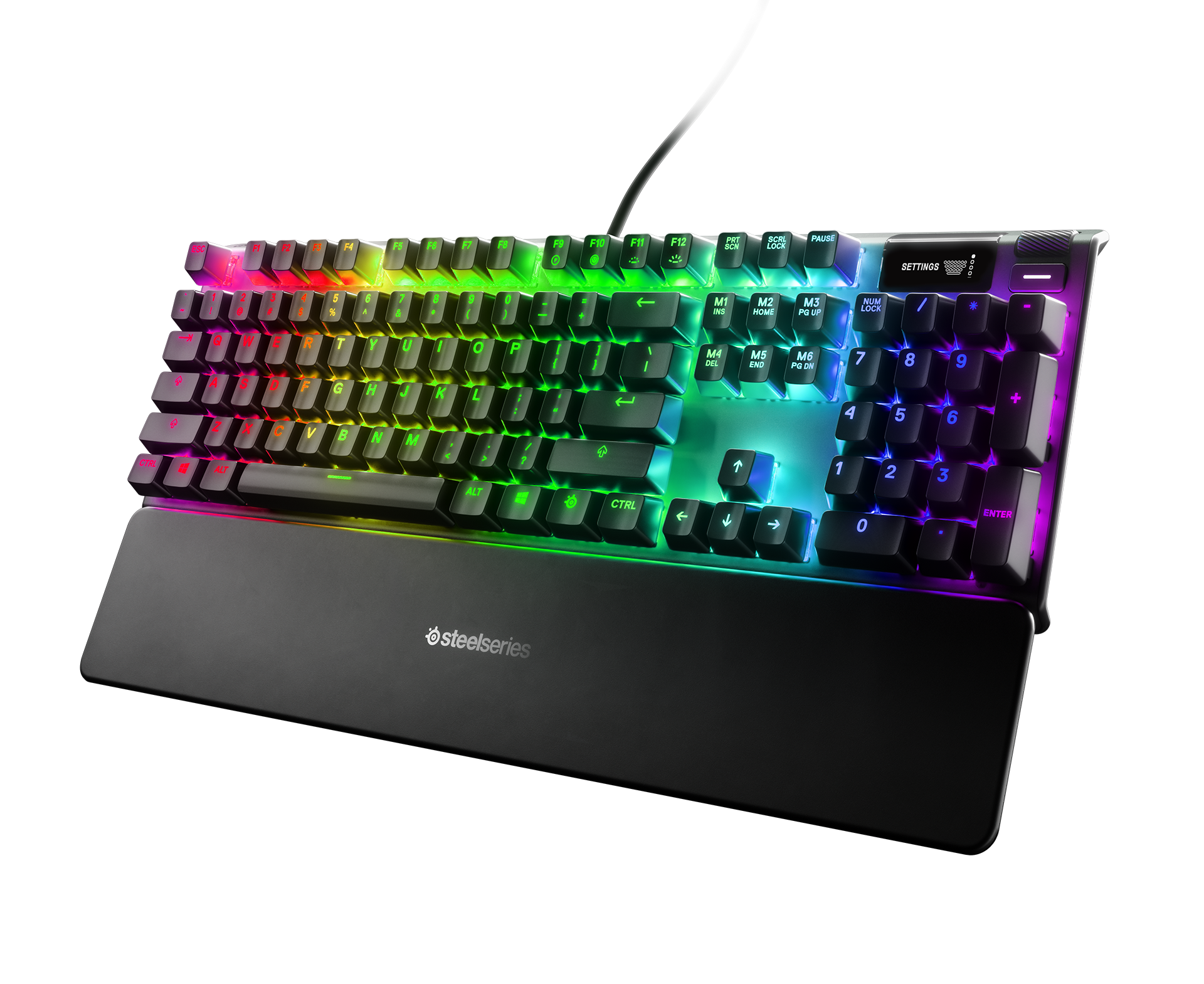 Let's look at how standard mechanical switches work, and then explain how the OmniPoint switches respond so much faster.

The limitation of mechanical speed

The average response time of traditional mechanical switches has a lot to do with one major speedbump: debounce time (also known as input lag). This is the time it takes between physically pressing a key, and a signal being sent.

In other words, it's the time that passes between pressing a doorbell button, and hearing the ding.

Mechanical switches are comprised of metal contact points that touch when a key is pressed, thus instantly completeing a circuit and registering a keypress. Fast and easy, right?

Well, it's not quite that simple.

Traditional mechanical sensors can sometimes get it wrong for any number of different reasons:

These variables can all provide "noisy" or false positive inputs when using the keyboard. 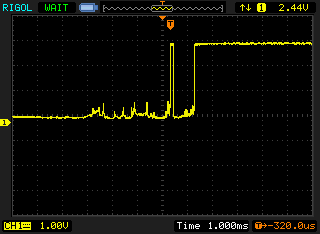 Is that first peak a keypress, or an accident? Is that two fast keypresses, or just one? This type of "noise" can result in false keypresses. (Photo: geekhack.org)

The solution to noise

Keyboard manufacters are smarter than to read every single connected current as a keypress. Doing so would mean mystery keypresses happening all the time due to the "noise" of the electric signals.

Instead, they rely on multiple scans of every input before making a judgement about whether the signal from a switch was actually a keypress, or it was just a false positive caused by the noise from the physical components and other variables.

This is why traditional mechanical keyboards average (at best) around a 6ms response time. This is the time it takes for the keyboard to make several scans of each key when it is pressed (or not pressed), and confidently determine an input.

To put 6ms in perspective, the blink of an eye takes around 100ms. So 6ms is pretty fast, right? The human eye can actually scan for change as rapidly as every 4ms.

So we wanted to create a keyboard with response time that was significantly faster than the speed at which the human eye could detect change.

If a switch could read an input in just one scan, it would drop the response time far below 4ms. The keyboard could register and react to a keypress faster than the human eye could perceive.

We weren't the first brand to recognize the need to eliminate debounce time by eliminating physical contact points and reducing the number of scans.

The Razer Opto-Mechanical switches use the reflection of LED lights as a way to eliminate debounce time. Physical components have debounce; light does not.

On these switches, the analog to digital converter (or ADC) is located on each switch. The ADC reads and then sends a signal to the keyboard's main chip.

In total, this takes about 2ms. A speed boost for sure, but we wanted to do even more.

Creating the OmniPoint switch gave us the ability to kill 2 speedy birds with an even speedier stone: Hall Effect technology. 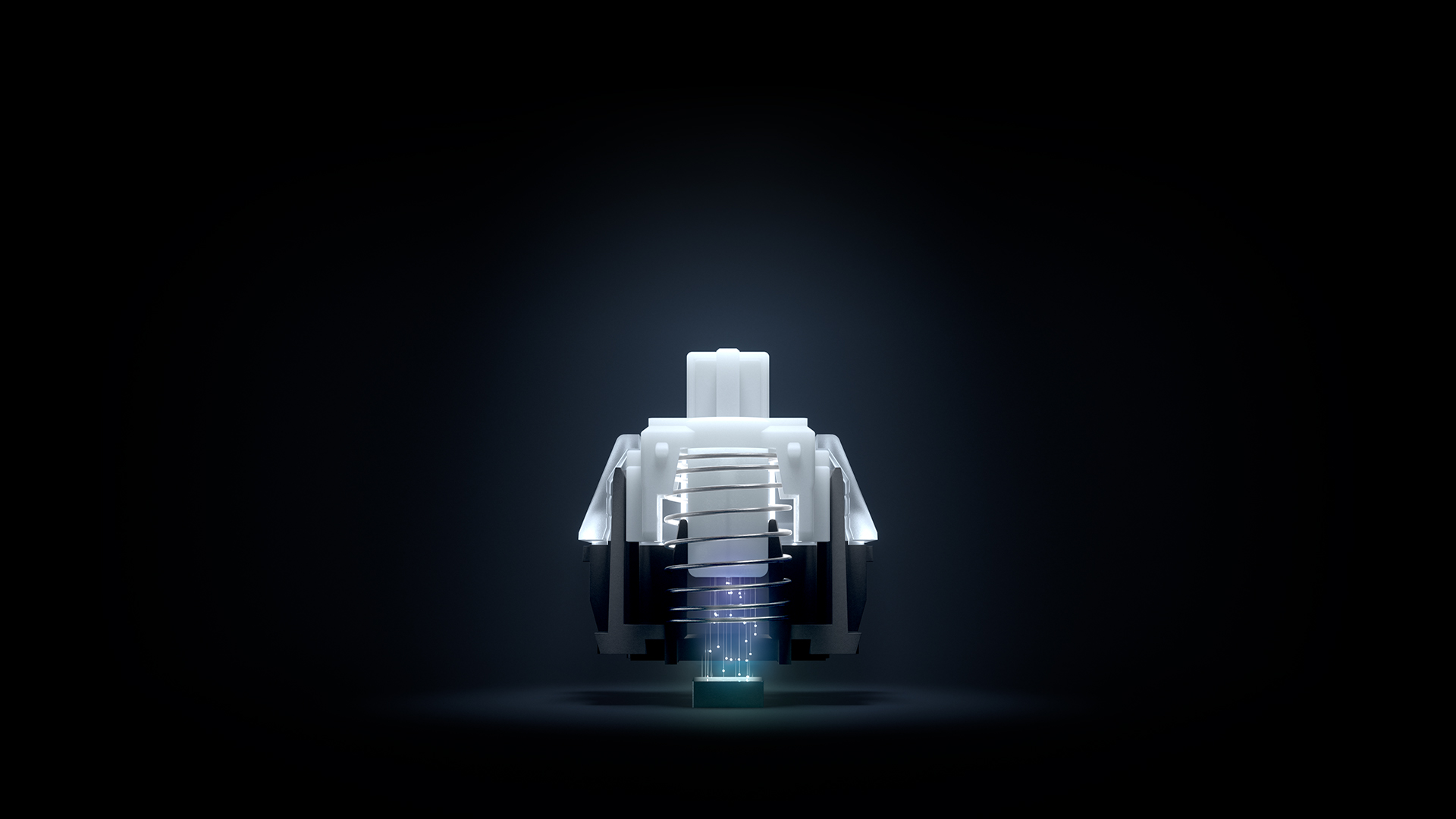 Explained simply, the Hall Effect works by moving a magnet through a coiled wire, and measuring the generated current based on the precise location of the magnet.

This analog approach eliminates input lag, since it only needs to be scanned by the keyboard once to send an accurate reading, instead of many times.

Over the years, Hall Effect technology has been used in aerospace, underwater, and military applications thanks to it's durability, adaptability, and reliability. 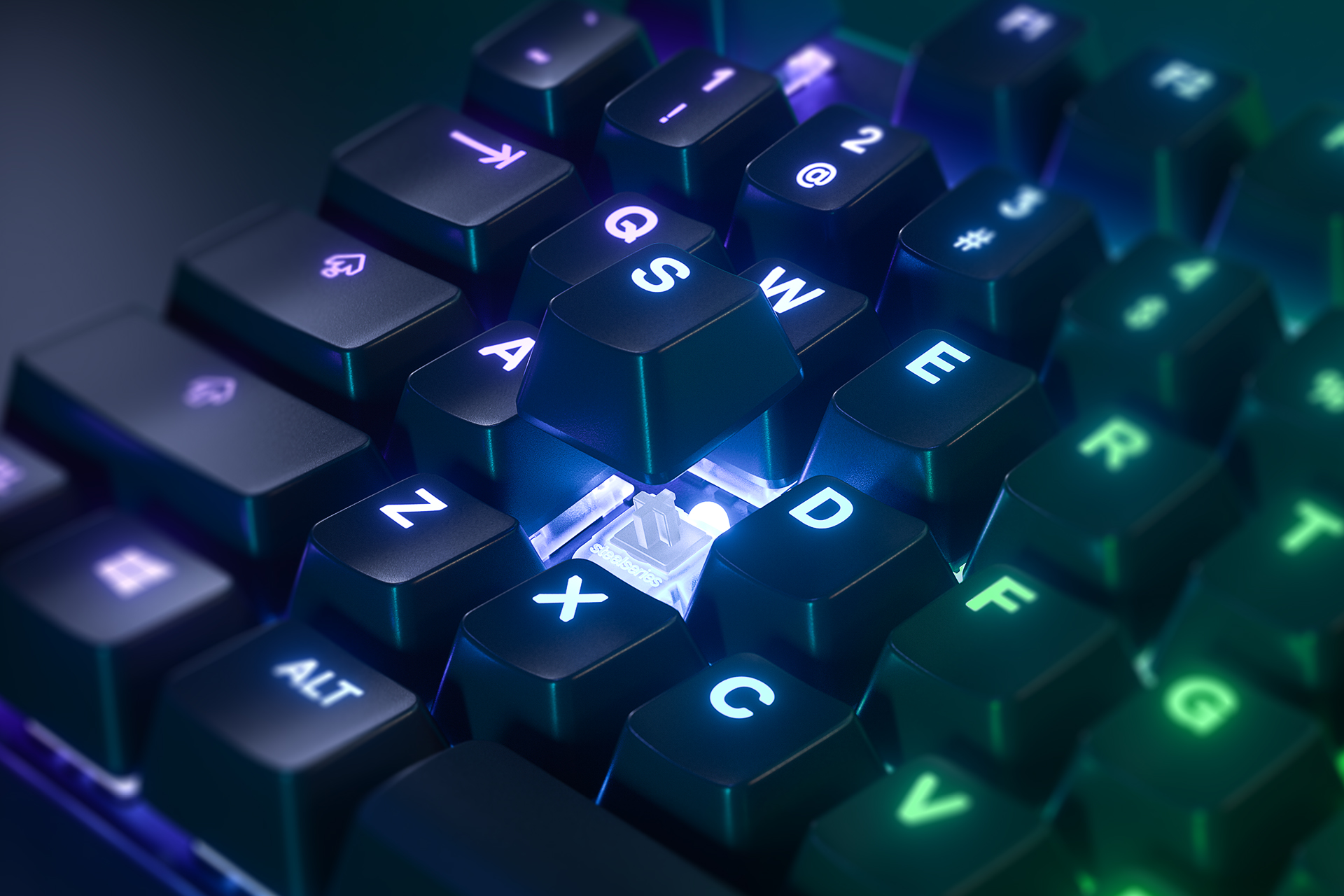 Despite an endless potential for improving products, it has historically been too expensive (or too bulky) to mass produce for something as intricate as a mechanical key switch...until now.

The main benefit of using this technology in a keyboard (in addition to significantly improved performance and reliability) is that it allows the sensititivity of each key to be adjusted. Think of adjustable actuation like being able to change the distance that you need to press down a doorbell before it decides to ring.

The OmniPoint switch can actuate at a distance as deep as 3.6mm, or as record-breakingly sensititve as 0.4mm.

The second half of the OmniPoint's speed boost has to do with actually processing the analog signal that the sensor gathers. (AKA the time it takes for the doorbell to ding after you've pressed the button).

Aside from only needing to be scanned once instead of multiple times, we put a lot of effort into perfectly optimizing the response time to be faster than any other by connecting the analog to digital converter directly to the keyboard's main chip for lightspeed processing. 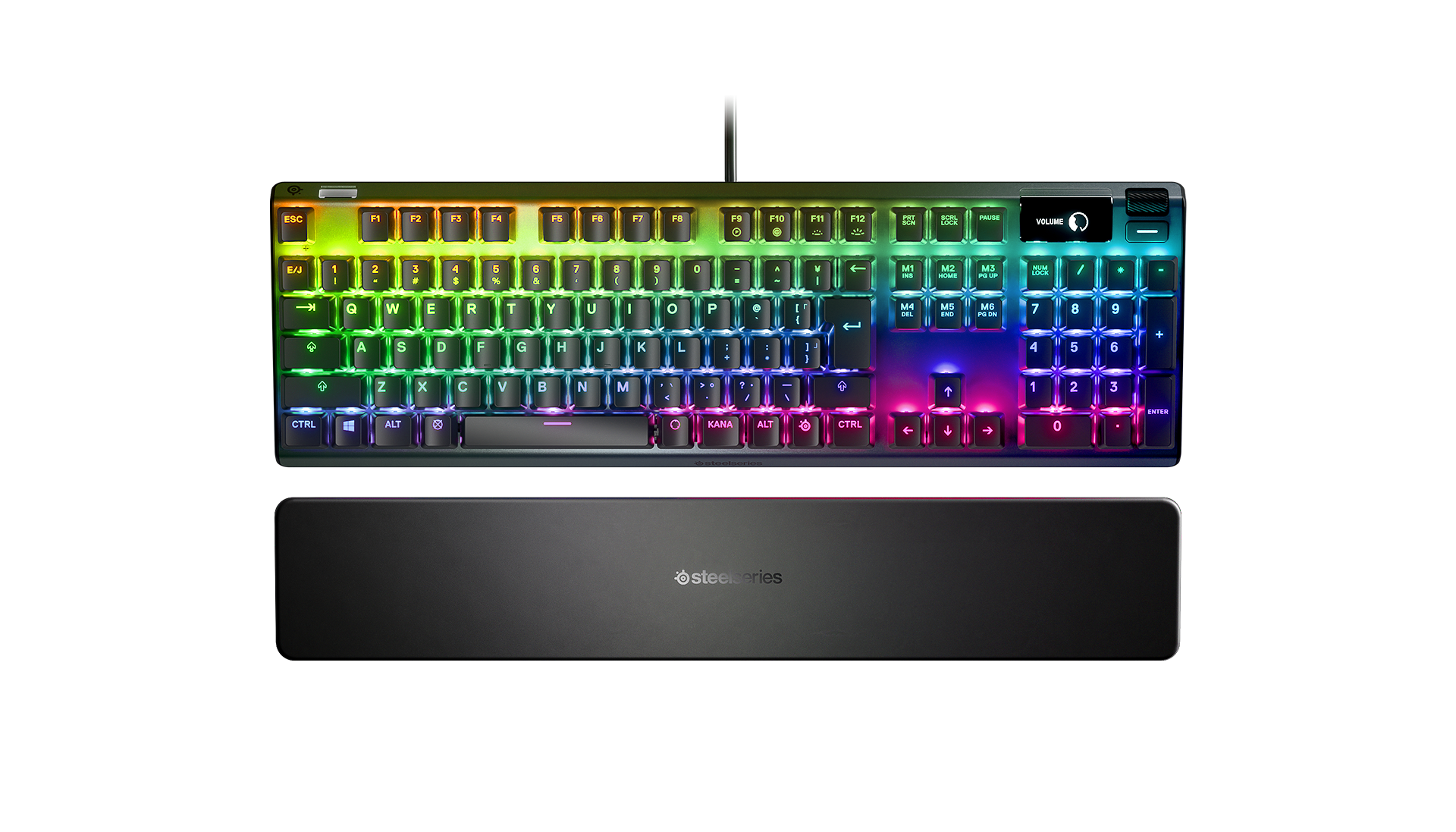 To summarize, we used the Hall Effect technology to eliminate input lag in three ways:

These factors add up to a never-before-seen 0.7ms response time, which is over 8x faster than the traditional mechanical switch, 5x faster than the human eye can percieve. Alongside it's 5x faster actuation, the Apex Pro is the new king of speed, by a lot. 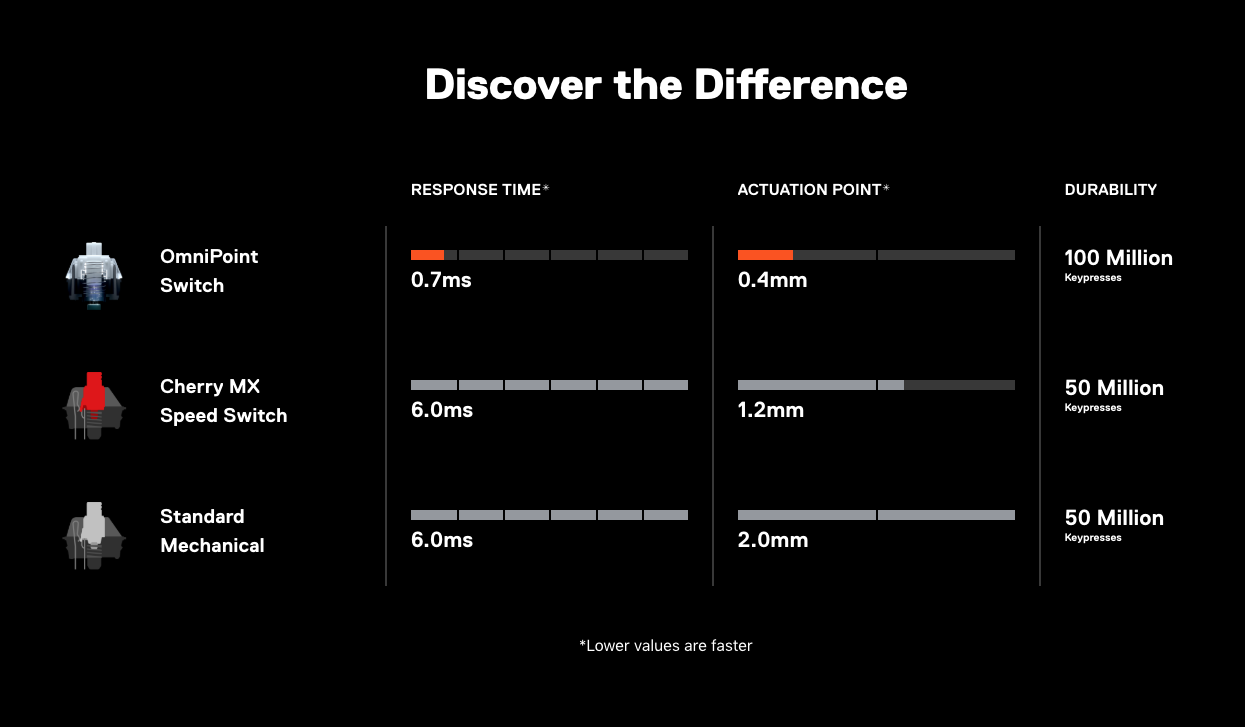 *Don't talk to me or my speed ever again.*

The innovative OmniPoint switches are only available on the Apex Pro and Apex Pro TKL.

The world's fastest gaming keyboard with ultimate adjustability for every key in full size form.

The world's fastest gaming keyboard with ultimate adjustability for every key in compact TKL form.